Watch the FREE Training NOW!
You are here: Home / Heal Your Gut / The Brain-Gut Connection 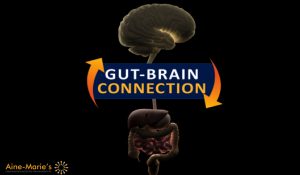 In a world where the body is viewed holistically as a group of interrelated systems that all rely on each other, the brain-gut connection makes perfect sense.

Your brain does more than just think and do and your gut is so much more than a food processor. There is an undeniable strong bond between these two systems that governs everything… from what you do, to how you do it, to the energy that makes it happen.

For example, many people get stomachaches when they are feeling anxious, worried, or dealing with stress. Heightened emotions and stress can worsen symptoms of abdominal cramps and pain and make you literally feel sick to your stomach. But when is it more than just an upset stomach? What conversations are going on between the gut and the brain during times of stress and sickness?

For decades now, two-way communication or “cross-talk” between the brain and the gut has long been recognized through established pathways of communication. These pathways go back and forth between the thinking and feeling centers in the brain, crisscross down the body, and connect up to the mechanics of food digestion in the gut.

The brain as the master commander, sending out instructions all over the body to do anything from lowering body temperature to fleeing a bad situation.

The brain however has a hotline to one of the biggest communication hubs in the body: the gut. Commands come directly from this communication center, which starts in your gut with the tiny microbiota that serve as signaling devices instructing the hormones (your body’s chemical messengers) to respond to stress, memory, and all the intricate biological mechanisms that keep the “lights on” every moment of your life.

When it comes right down to it, all along this brain-gut axis, there is a constant intricate biological dance occurring between gut flora, electrical impulses, and hormones, that determine health and vitality throughout every system in the body.

Your gut is sometimes referred to as the “little” or “second” brain because of its important role in communications and interplay between almost every part of the body.

It can do this because hidden in the thin walls of the gut, all the way from the esophagus to the rectum, are more than 100 million nerves. These nerves are collectively called the enteric nervous system (ENS) and often referred to as the “little” brain.

Unlike the big brain, the “gut brain” or ENS, can’t create a shopping list, solve a complex math problem, or drive a car. Its sole responsibility is to convert food and nutrients into energy in order to feed the entire body.

Let’s not forget the trillions of gut microbiota that also have an important role to play in the cross communications along the brain-gut axis. The microorganisms in your gut, which by the way constantly change, have the ability to regulate brain chemistry and influence the stress response, anxiety, and memory function.

How Does The Brain-Gut Connection Work

Because your brain and the gut share some of the same biological ingredients, there is a mysterious relationship between the two.

Communications between the brain and gut travels along neural pathways and the vagus nerve in particular. This long cranial nerve extends from the brainstem to the abdomen passing through multiple organs including the esophagus, heart, lungs, and finally taking root in the gut.

The vagus nerve is unique because it facilitates messages between the brain and the gut about pushing food through the intestines, rising levels of inflammation, and conveys threatening “gut feelings” to the brain.

The vagus nerve has one of the largest routes in the body… it starts in the brainstem and passes through the neck, upper body, and finally ends down in the abdomen. It’s sort of the main freeway to deliver traffic between the brain and gut.

Poor communications along the vagus nerve can mean bidirectional problems in the brain or gut or both.

Recently a team conducted a clinical trial, which demonstrates that stimulating the vagus nerve with a small implanted device significantly reduced inflammation and improved outcomes for patients with rheumatoid arthritis.1

The brain has a prominent role to play in the regulating of gut functions, so failure in the brain can lead to slower motility in the intestines, resulting in sluggish digestion, low secretion of digestive enzymes, overgrowth of bad bacteria and yeast, and inflammation.

Disturbances In The Brain-Gut Axis

Since the gut is your largest immune organ, it would make perfect sense that any imbalances would ripple through it via the brain to all other parts of the body. This is why chronic inflammation originating in the gut can be so problematic and is seen by researchers as a root cause for many chronic diseases and health conditions including cognitive and neurological.2

Recent findings show that the gut microbiota are important for normal healthy brain and neural function. Brain-derived neurotrophic factor (BDNF) influences many processes, such as the health of neurons and neuroplasticity (the ability to form new connections and change over time), and fluctuations in BDNF have been noted in relation to the gut-brain axis.3  Needless to say, BDNF is important for aging, motor coordination skills, memory, learning, and more.

Depression and anxiety are associated with imbalances in your “fight and flight” mechanism and hypothalamic-pituitary-adrenal (HPA) axis, which involves cortisol (your stress hormone). Researchers are now able to study the relationships between stress-induced behavior and your fluctuating microbiota.4

More recently a study noted that gut microbiome imbalance was present in autism. In fact, autistic patients present specific microbiota alterations according to the severity of the disease.5

If the brain-gut axis ceases to work well, you are inevitably paving the way for something else to happen like leaky gut, leaky brain, systemic inflammation, and autoimmune disease.6

Happiness Is a Gut Feeling

The gut also has an important role in the development of neurotransmitters, which are the brain chemicals that communicate information throughout your brain and body. The brain uses neurotransmitters to tell your heart to beat, your lungs to breathe, and your stomach to digest, among other things.

In the gut, it all starts with the neurotransmitters GABA and Serotonin, which are responsible for regulating mood, appetite, sleep, and relaxation. When the gut is full of healthy bacteria, it has the potential to regulate mood and positive feelings.

Specifically, two important gut functions come to mind with regard to neurotransmitter production in the gut.

First of all, during digestion proteins are broken down into amino acids, which are the building blocks for neurotransmitters. So your meals, depending on their protein content, can rapidly influence amino acid to neurotransmitter conversion, therefore influencing brain function.

Secondly, about 90% of the brain chemical serotonin is found in the gut (not in the brain as most people think). The right amount of serotonin produces a relaxed and positive feeling. In fact, altered levels of serotonin have been linked to diseases such as IBS, cardiovascular disease, and osteoporosis.7

Here’s a good example about the beneficial connection between probiotics, neurotransmitters and mood. If you’ve ever taken an anti-depressant, you may know that the body eventually builds up a resistance to SSRI medication. So some doctors are considering an alternative to treating depression with these potentially harmful medications, and are instead prescribing a specific probiotic supplement. Experimental therapies like this benefit not only the gut and brain, but the health of the overall body. 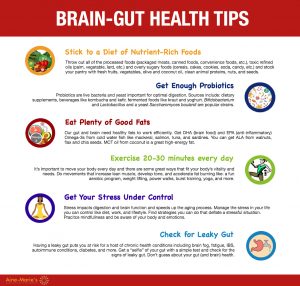 Just to Recap about the Brain-Gut Connection

Have YOU been experiencing brain fog, depression, anxiety, and just not feeling like your old self? Are you curious about whether you have leaky gut and want to find a test for it? Here’s the remedy: Gut Health Secrets 90-Day Gut & Microbiome Boot Camp. This is the only boot camp for turning your gut health around and jump starting your journey back to optimal health. Click HERE for more information.

The Microbiome & The Milky Way
Mind-Body Wisdom For Self-Healing