Watch the FREE Training NOW!
You are here: Home / Heal Your Gut / Are YOU Intolerant to Gluten or Glyphosate? 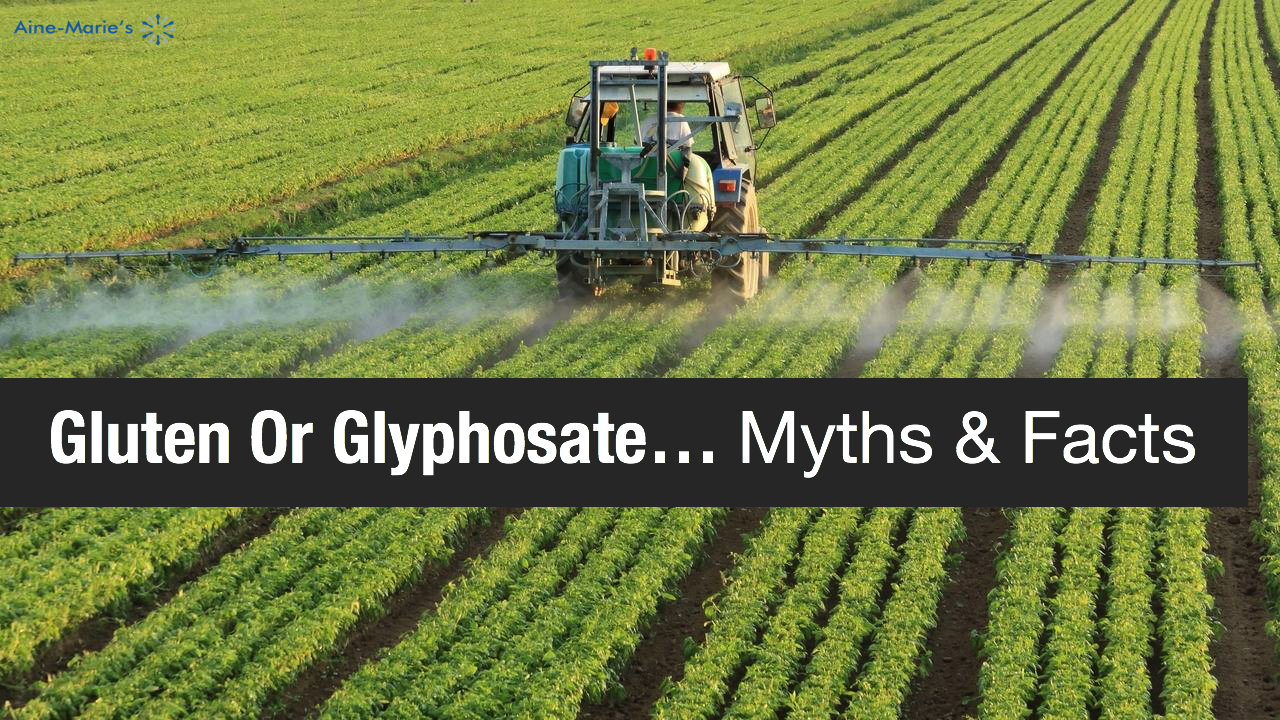 Move over gluten… there’s a new dietary villain in town and its name is glyphosate. It seems as of lately there has been lots of talk about glyphosate, the key ingredient in the herbicide Roundup, being maybe one of the most important causal factors related to digestive problems reminiscent of celiac disease and gluten sensitivity.

But are you reactive to the actual peptides of gluten naturally occurring in many grains or is maybe glyphosate, which was patented by Monsanto back in the 70s as an “antibiotic”, the root cause of why you have digestive issues and things like leaky gut, chronic inflammation, gut bacteria overgrowth, gas/bloating, and more?

I scratch my head now when clients and some uniformed believe that even though they don’t eat wheat or gluten anymore and their tests show that there is no more leaky gut condition or bacterial overgrowth, which by the way took them years to achieve, that all is well with their gut and immune system and that they can now eat “organic non-sprayed wheat and gluten-containing grains”. They are convinced that in fact it’s the glyphosate not the gluten that has been the root cause of their symptoms all along.

It All Comes Down to Cause and Effect

If you want to know the answer to the health question, “is it gluten or glyphosate”, you’ll have to embark on a personal journey of discovery. A good place to start that journey is by first knowing your “Gut IQ”; simply put, this is your GI health score. By understanding your overall GI health and identifying key root causes FIRST, you can give order and meaning to “what” you should do and more importantly, “when” you should do it.

If you have food allergies and intolerances, digestive issues like abdominal pain, bloating, gas, constipation, joint swelling or pain, or chronic inflammation, don’t just reach for Advil, Pepto-Bismol, Beano or Benadryl, which in most cases only provides temporary relief to symptoms and doesn’t actually get at “why” you are feeling poorly. Instead, rule out first whether you have a leaky gut condition, reactivity to common proteins like gluten, lectins or agglutinins, poor gut microbiome health or dysbiosis, a long-standing infection or yeast overgrowth, or even if glyphosate is detected in high amounts in your body . If you address these common root causes seen in conjunction with so many GI and autoimmune conditions before you run off and medicate yourself to cover up the symptoms, you’ll be pleasantly surprised that many of those nagging symptoms begin to go away.

Vigilance Is The Best Prevention

If you have a history of poor digestion, leaky gut, antibiotic or medication use, bacteria overgrowth or infections, or autoimmune symptoms, then you really need to separate fact from fiction around the root cause of your symptoms because let’s face it… your future health is at stake.

There are different levels of vigilance needed with certain common GI and immune health conditions. For example, if you have been diagnosed with celiac disease, this is a serious condition and needs a high level of attention paid to the diet (in particular gluten), whereas if you have a gluten sensitivity, wheat allergy, digestive issues or inflammation that comes and goes, then you need to look to “other issues” going on in the gut that “could” be attributing to the symptoms you are having. Ignoring symptoms early-on won’t just make them go away… they actually get worse.

The best advice is to get some good health detective work done to rule things in or out in order to allow you to make informed health choices. Be vigilant in your efforts until you are confident your health is headed in the right direction including reduction of symptoms, improvement of energy, and important bio-markers return to “normal” ranges.

Gluten or Glyphosate… What’s Your Intolerance

Pick up a magazine or go online today and you are likely to read some headline about gluten, gluten-free diet, Roundup or glyphosate. In some instances, these dietary villains are inseparable and things can get confusing. To give some context, let’s just start off by capturing some of the facts on these…

Agreeably, much needed research investigating specific toxicity of active ingredients in herbicides and pesticides found in so much of our food, water, and air, needs to done and debated openly in the public forum. We need to understand long-term health effects caused by not only specific single ingredients but all the ingredients taken collectively in things ingested by the body. There needs to be a clearer understanding of “cause and effect” of compounds like glyphosate, especially given outstanding research on antibiotic usage and GI health.

Celiac Disease… The Silent Killer You Need to Pay Attention To

It’s estimated that over 3million people in the U.S. have celiac disease. Take note that this is for “diagnosed” cases, so in reality the numbers are actually higher. Unfortunately for most people who suffer with this condition or who are at a high risk genetically, a true diagnosis can take anywhere from 7-10 years and multiple specialists.

With celiac disease, the immune system reacts to eating gluten by creating inflammation that damages the small intestine’s lining. This can prevent absorption of some nutrients (malabsorption) or cause other symptoms such as diarrhea, bloating, gas, fatigue, low blood count (anemia), and osteoporosis.

The truth is, many people have no symptoms what so ever for years and this is called “silent” celiac disease.

Here are some things about celiac disease you may not know…

If you or someone you know has a history of digestive, gut or autoimmune issues, you need to rule out things like gluten and other food intolerances and intestinal permeability FIRST before looking at things like bacteria dysbiosis, infections, genetics, and so forth. One of the easiest things you can do is just take simple test. Honestly, don’t just let years go by with no action. It’s better to test than to guess. Click HERE to find out more about wheat/gluten and leaky gut testing.

Did you know that a full spectrum infrared sauna provides excellent detoxification from glyphosate? Saunas can also help people recover from a wide range of diseases and conditions. Look into a spa that offers these treatments or you can purchase your own personal home sauna at various price ranges.