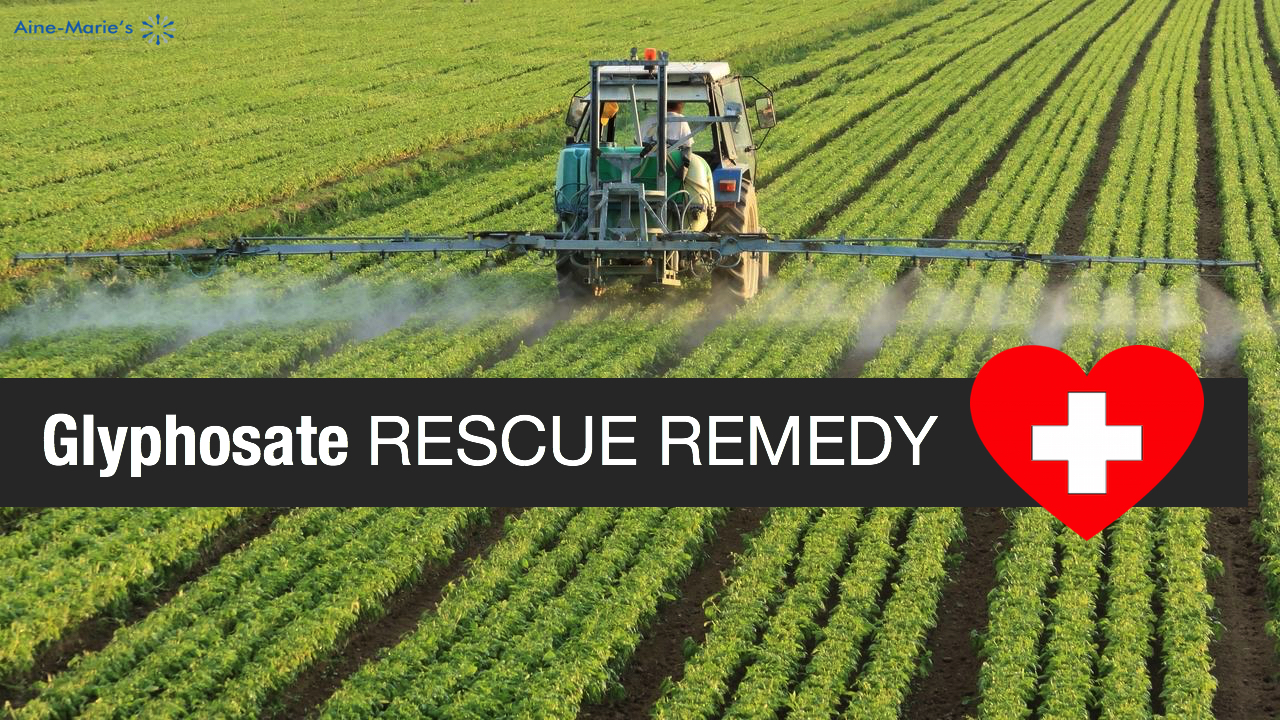 For the past few decades many of our precious food systems have been tainted by any number of herbicides and pesticides. The one that comes to mind more often here in the U.S. especially given all the recent press and lawsuits, is Monsanto’s (now owned by Bayer) glyphosate-based herbicide Roundup, which we are now discovering can cause a host of health issues, including cancer.

Amidst a slew of lawsuits where courts and jurors alike are weighing in favor of victims, people are now becoming more aware that the Roundup herbicide along with other pesticides in our food, may be directly or indirectly promoting health conditions such as obesity, infertility, cancer, digestive problems, autism, brain fog, skin conditions, gluten sensitivity, allergies, fatigue, anxiety, and many other conditions.

Given recent correlations of glyphosate-based herbicides to chronic health issues, healthcare professionals are beginning to see the benefits of recommending non-GMO and organic diets for what ails their patients. Remarkably, they are also reporting dramatic improvements in numerous diseases and symptoms as a result of these dietary improvements.

Basically, people are feeling better on healthier diets including non-GMO and organic options.

For those of you who pay attention to your diet and think it’s pretty “clean” as far as potentially toxic and in most cases unnecessary chemicals, you may still be missing hidden ingredients that may be harmful. Important research into digestive and gut microbiome health also points to the importance of food along with personal vigilance as two key parts of preventing chronic disease and promoting optimal long-term health.

As in most situations, there are the good and not so good sides this story that we need to be aware of in order to take the most appropriate actions.

The bad news with glyphosate-based herbicide residues in food are they persist long after initial treatment and are not lost during the baking or cleaning process. The good news however is there is an alternative or a “rescue remedy” if you will for typical glyphosate exposure from food… eat non-GMO and organic foods from local farmers or trusted sources and have on-hand good gut healing remedies including herbs, supplements and probiotics.

Glyphosate is an active ingredient used in herbicide that is typically applied in mixtures known as glyphosate-based herbicides (GBHs) and is sold around the world as Roundup® and Ranger Pro® among others. It’s not shocking that the prolific use of GBHs has increased dramatically worldwide in recent decades. In the United States alone, usage increased nearly 16% between 1992 and 2009.1 This increase can be correlated to the introduction of genetically modified (GM) glyphosate-resistant “Roundup-ready” crops in 1996.1

Also alarming is the increased practice of applying glyphosate and Roundup to crops shortly before harvest e.g., so-called “green burndown,” which began in the early 2000s. This process acts to speed up crop desiccation. But sadly this practice has an unfortunate consequence as the crops are likely to have higher GBH residues, which unfortunately gets passed along to consumers like people or animals.

Glyphosate and its related substances prevail in the food we eat, the water we drink and the air we breath. This means that given its pervasiveness, there is a high likelihood that most of us are repeatedly exposed to it in our daily lives.2

Today, over 80% of genetically modified crops grown worldwide are engineered specifically to tolerate glyphosate herbicides. Initially farmers were told that it would help them control weeds and increase crop yields. They could spray their crops with glyphosate herbicide, killing all the pesky weeds without killing the good crop. This initial notion proved problematic over the years as things like glyphosate resistant “super-weeds” became widespread.

By the year 2011, the U.S. used a whopping 527 million pounds of glyphosate-based herbicide on crops. Unfortunately, people and animals that eat GM glyphosate-tolerant crops are eating potentially high levels of Roundup residues.9

Here are some interesting factoids on GMOs and Roundup taken from a leading research institute and authority on GMOs,3

• Creating GMO foods can create side effects that can promote cancer. Monsanto’s “Roundup Ready” corn, for example, has higher levels of putrescine and cadaverine. These are not only linked to cancer and allergies, they produce the foul smell of rotting dead bodies.

• Bt-toxin, a by-product of genetically modified varieties of corn, cotton, and South American soy, pokes holes in cell walls. It may create “leaky gut,” which is linked to cancer and numerous other diseases.

• Most GMOs are “Roundup Ready” designed to be sprayed with Monsanto’s Roundup herbicide. These include soy, corn, cotton, canola, sugar beets (for sugar), and alfalfa.

• Glyphosate, the active ingredient in Roundup, is classified as a class 2A carcinogen by the World Health Organization. They said it probably causes cancer in humans, does cause cancer in animals, does cause mutations in DNA that can lead to cancer, and where it is heavily sprayed, cancer rates are higher.

• Roundup is sprayed on numerous non-GMO crops just before harvest as a desiccant, to dry down the crop as it is killed by the herbicide. Some of these other crops include: wheat, oats, flax, peas, lentils, dry beans, sugar cane, rye, triticale, buckwheat, millet, potatoes and sunflowers. Canola, corn and soybeans labeled non-GMO may also be sprayed with Roundup.

According to a new University of Washington meta-analysis study (the best kind of study as they aggregate and summarize the findings of many studies) investigating whether there was an association between high cumulative exposures to glyphosate-based herbicides and increased risk of non-Hodgkin lymphoma, found that indeed exposure to chemicals in the weed killer Roundup increases the risk of some cancers by more than 40 percent, (NHL) in humans.4

Did you get that… this study found that the overall risk of non-Hodgkin lymphoma in GBH-exposed individuals increased by 41%.4

In addition to non-Hodgkin lymphoma, other illnesses and symptoms have also been linked to exposure to glyphosate-based herbicides.

For instance, some cancer rates in the U.S. are rising in parallel with increased use of glyphosate on GMO soy and cornfields including leukemia and cancers of the liver, kidney, bladder, thyroid, and breast.3 In Argentina, the rate of cancer in communities living near Roundup-Ready soybean fields has also skyrocketed, as have birth defects, thyroid conditions, lupus, and respiratory problems.5

Agreeably, much needed research investigating specific toxicity of active ingredients in herbicides and pesticides found in so much of our food, water, and air, needs to done and debated openly in the public forum. We need to understand long-term health effects caused by not only specific single ingredients (like glyphosate), but all the ingredients taken collectively in things ingested by the body.

There needs to be a clearer understanding of “cause and effect” of compounds like glyphosate, especially given outstanding research on other factors related to poor health like antibiotic usage, microbiome diversity, intestinal permeability, etc.

Studies are now showing that glyphosate-ready herbicides like Roundup negatively affect your “friendly” gut bacteria, while promoting the growth of more harmful bacteria. There has been a dramatic rise in the amount of research around gut microbiome health showing altered gut bacteria ecosystems in people with IBS, diarrhea, malnutrition, as well as in a subset of autistic people.7

One study found that exposure to glyphosate-based herbicides at “safe” doses, starting from in utero, may modify the composition of gut microbiome.8 Unfortunately, imbalances in your gut microbes (dybiosis) has been associated with a number of negative health outcomes, such as leaky gut, obesity, diabetes, lingering infections, and immune problems.

The gut microbiota and microbiome at large are some of the most enlightening areas of research out there today and will likely produce an incredible amount of information to better predict and prevent chronic disease. 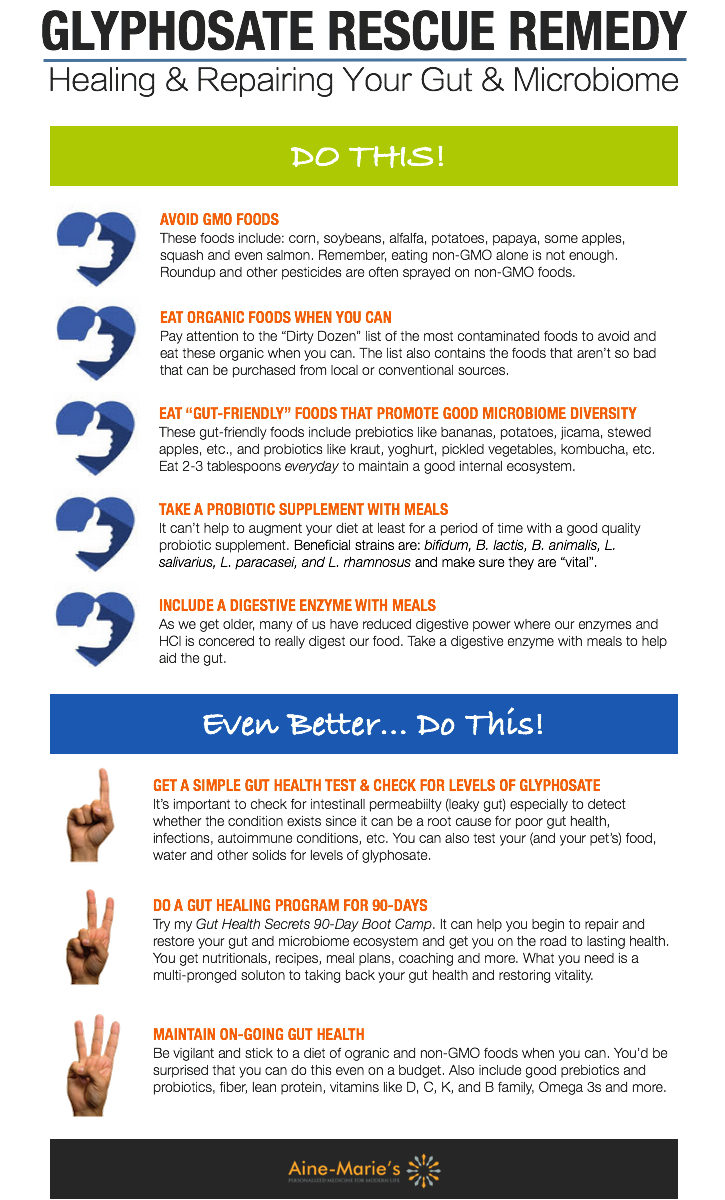 There are certainly a number of preventative steps you can take to prevent exposure to glyphosate-based herbicides. If you follow some of these guidelines, you and your family can live a healthier and more vital life.

• Avoid GMO foods – these would include: corn, soybeans, potatoes, papaya, alfalfa, some apples, squash, and even salmon. NOTE: eating non-GMO alone is not enough. Roundup and other toxic pesticides in some cases are sprayed even on non-GMO foods.

• Eat Organic when you can – a big help is to pay attention to the Dirty Dozen, which are the most contaminated fruits and vegetables to avoid, as well as the top foods that have the least contamination and can be purchased from conventional sources.

• Take a probiotic supplement with your meals – the best are those that contain “multi” strains especially: bifidum, B. lactis, B. animalis, L. salivarius, L. paracasei, and L. rhamnosus

• Include a digestive enzymes with your meals especially if you are older or have a history of poor digestion.

If you’ve been exposed for years to glyphosate-based herbicides and you are having symptoms like food allergies, bloating, gas, constipation/diarrhea, or autoimmune symptoms, then consider taking a more vigilant approach that includes:

Step 1: Get a simple gut health test to see if you have intestinal permeability – this will help you understand if the root cause of your symptoms could be due to a leaky gut condition possibly caused or made worse through exposure to glyphosate. Take a leaky gut test.

Step 3: Do a simple gut healing program for 90-days that will begin to repair and restore gut health; this will set you on the road to lasting health. Join a 90-day Gut Health Boot Camp.

• Glyphosate-based herbicide Roundup can cause a host of health issues, including cancer

• Glyphosate, the active ingredient in Roundup, is classified as a class 2A carcinogen by the World Health Organization

• You can repair and nourish your gut with the proper diet, nutritionals and time

• Eat organic when you can and even better cut out the GMO foods.

If You Say Yes to Any of The Following… Get a Remedy NOW!
• Do you eat GMO and non-organic foods?
• Do you have food sensitivities and allergies?
• Do you have a lot of “on-going” digestive issues like bloating, gas, and pain, skin rashes, or chronic inflammation?
• Do you have symptoms that just won’t go away no matter what you do?
• Have you had a round of antibiotics in the last 18-24 months?
• Have you been diagnosed with an autoimmune disease?

Take steps to heal your gut and prevent other serious symptoms from zapping your vitality and preventing you from living the kind of healthy life you desire with the Gut Health Secrets 90-Day Boot Camp.